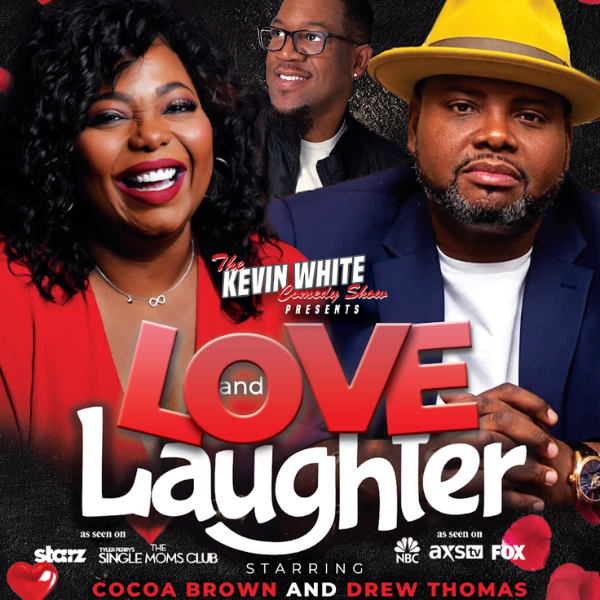 With Cocoa Brown and Drew Thomas!

When actress and comedian Cocoa Brown takes the stage, the world stands still.

Brown is undeniably one of the most talented comics and performers of this generation.
The Newport News, Virginia native, born Farah Brown, assails her craft with such passion and soul-searching veracity when she claims a stage the ensuing act is nothing short of a force of nature. Cocoa Brown audaciously draws from painful reminiscences and hard-knocked lessons, bravely weaving humorous tales that uplift, upend, and upgrade everything you thought you knew about comedy. What drives the comic who female fans nationwide have nicknamed the “The Truth”? The sheer will of a woman
who survived the worst life had to offer and is still standing.

The fiery performer, whose credits include Tyler Perry’s critically acclaimed comedy series “For Better or Worse” on Oprah Winfrey’s OWN network and a national commercial spot for Progressive Insurance Company, has assembled an extensive body
of work. A career that began as an advertising associate for Ringling Bros and Barnum & Bailey Circus and a writer for various sketch comedy shows proved confining for the dynamic performer. She honed her writing and creativity to pursue her dream of being a
stand-up comic. A decade later Brown had nearly mastered the art of comedy. She harnessed its essence and purpose, performing on top-rated comedy shows including BET’s “Comic View” and “One Mic Stand”, and “Showtime at the Apollo”.

Today, she exemplifies mind-blowing humor, daring drama and contemporary reality wrapped in a boundlessly energetic package. Whether she is performing in honor of the incomparable Richard Pryor or acting in films such as “Lakeview Terrace” with Samuel
L. Jackson, Brown exudes skill and discipline. Those characteristics, along with her chilling story of struggle and redemption, inspired Tyler Perry to create “Single Moms Club”, a feature film that casts the accomplished actress in the leading role. The movie is
scheduled to hit theaters in 2014. The comedy veteran and rising star, fueled by Perry’s powerful vote of confidence, is ramping up her ambitions in a relentless mission to become the performer many people doubted but even more admire. With a nomination
for a Screen Actors Guild award under her belt, Brown has her sights set on an Oscar, an Emmy and a Pulitzer Prize. She is writing a revealing autobiography and producing her highly anticipated one-woman show, “Confessions of a Suicidal Diva”.

The art of classic stand-up comedy is still a thing! And one of today’s talented comedians lending to that style comes from the voice of Drew Thomas. For over 10 years, Drew has been treating the stage like his home, drawing his diverse audiences into a world of “face hurting” laughter with his quick wit and smooth delivery he gives accounts of relationship follies and keen retorts on everyday life.

Originally a native of Kingston Jamaica, Drew migrated with his family to the U.S. at 9 years old. Adjusting to New York culture was quite the adolescent challenge at first, but he soon made friends by defending himself through humor and honing his skill of “snapping" in his Bronx neighborhood. It was not much later, while listening to an Eddie Murphy comedy album in his friend’s living room that he envisioned himself becoming a stand-up comedian "one day". Years later, after being fired from his job as a car salesman in Atlanta and consistent nudging from a friend, Drew decided to "get off the couch" and finally give his childhood dream a shot. While pursuing a second degree in Theatre at Kennesaw State University, he convinced event organizers to let him open at their Valentine’s Day comedy show. Within a short amount of time, Drew went from winning a local comedy competition 3 months in a row, to honing his set and hosting at the infamous Phat Comedy Show at Twisted Taco and the legendary Punchline in Atlanta. In 2006, Drew was voted Best Comedian in Atlanta by Creative Loafing and soon after hit the road touring the country performing in 45 states, 40 plus weeks a year.

His hard work has led to appearances on NBC's Last Comic Standing (Seasons 6 & 9) and The Late Late Show with Craig Ferguson, For 3 yrs Drew was the opening act on Rodney Carrington’s Laughter’s Good Tour playing countless theaters, arenas and casinos throughout the U.S. and Canada. Drew has also opened for notable musical acts such as Salt N Pepa, Boyz II Men, Chaka Khan, Al Green, Jeffrey Osborne, Tito Jackson, M.C. Hammer, The Temptations, Morris Day and The Isley Brothers, just to name a few. He's also appeared at over 75 Colleges and Universities. In addition to performing, he also produced two successful comedy series at California’s Morongo and Chumash casinos. You can currently catch him on Gotham Comedy Live, Laughs on Fox and Comedy All Stars on Pure Flix or at a Comedy Club near you. His work ethic is above par and he continues to grow as an artist. He mentors young comics, does private comedy coaching, and still makes time to take acting classes and maintain a personal life. Look out for upcoming projects!